Over the past several years, I have worked at the forefront of the move away from “dead tree” to online flexible educational materials with CK-12. For this small non-profit company, I have served as a curriculum developer, author, editor and domain expert in Earth Science.  I am credited as author for two of their high school Earth science books, and I have also assisted with writing and editing two middle school Earth science books. For each of the books, I have helped to find, design and create supplementary materials such as images, videos, questions and exercises.

Our Fragile Planet, a set of eight trade books, was my major accomplishment in environmental science. Aimed at grades 6 through 12, and published by Chelsea House in 2007-2008, each book constructs a detailed scientific framework for environmental issues, describes those issues and explores the actions that we can take as individuals and as a society. “Oceans: How We Use the Seas” was named one of the “Top Ten Environmental Books for Youth for 2007” by Booklist.
See them on Amazon: Our Fragile Planet, Desonie

Booklist named Oceans: How We Use the Seas one of the top 10 environmental books for youth in 2007!

Cosmic Collisions, my first book, dealt with the importance of asteroids and comets in earth history and the possible consequences of a future asteroid collision with our planet. The New York Times Book Review liked my ability “to spin a good story” and reported that the book was “written in simple, straightforward language.”

“… after a conversation with …, our domain expert, we both concur you are one of our most gifted writers.” Juli Weiss, CK-12 Foundation

“…you did indeed already receive some great honors from Booklist for Oceans: How We Use the Seas. That title was selected as one of Booklist's "Top Ten Environmental Books for Youth" and received a good review from that publication as well. Congratulations!”
Laurie Katz, Director of Publicity, Facts on File

Our Fragile Planet set, Chelsea House, 2007-2008
Atmosphere: Air Pollution and its Effects
Oceans: How We Use the Seas
Hydrosphere: Freshwater Systems and Pollution
Biosphere: Ecosystems and Biodiversity Loss
Climate: Causes and Effects of Climate Change
Geosphere: The Land and Its Uses
Polar Regions: Human Impacts on the Arctic and Antarctic
Humans and the Natural Environment: The Future of Our Planet 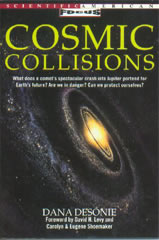 Radio scripts for “Our Ocean World,” including Why Explore the Arctic?, How Much is a Beach Worth?, Gray Whale Recovery, and Ocean Sounds, Finger Lakes Production, International, 2003.

News stories and explorations for the web page of MathSoft, Inc., 2000-2002: What’s Hot about Astrobiology?; From Where the Whale?; Sleuthing at the Grand Canyon; Forecasting Volcanic Eruptions; The Perils of Flying; Hey Girls, Are You Out There?; Storms at the Bottom of the Sea; A Threat to India; Is Pluto a Planet?; Are We All Martians?; For SETI, Things are Looking Up; The Tyrannosaurus Family Tree; A NEAR Look at a Tiny Neighbor; Discovery of a Lost City, and Bleaching: A Coral Survival Strategy.

For clips or book sections, please contact me at: